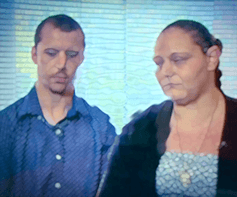 Usually, I write a prologue to reveal some of the background for the piece. FT500 did all this for me, and more, with a very generous author profile. Please enjoy in all its sad glory:

Every day, the same thing for breakfast: cold, tasteless ridicule from a woman who owned everything but happiness, served to the husband she surely blamed for it. She couldn’t start her day without cupping her displeasure in venomous words. It didn’t matter if the man or the cat or the kitchen wallpaper sat before her, the room received invectives. Most days, more than he cared to count, the husband was there to receive them.

He had thought today’s vitriol might have been earned since he had forgotten their anniversary, but it turned out she hadn’t remembered either. This date had long been uncircled from her mental calendar, filled instead by back-to-back appointments of acrimony and stony silence. He used to fill the daily aftermath with reason or excuses, but any volley of words turned the brief, painful harangue into a protracted argument. It was wiser to bite his tongue, no matter how much it bled.

He made one of the throat-clearing sounds she found so annoying. Something warm and thick had come up to the back of his throat. Another cough and it was on his tongue.

“Everything okay?” she said in reflex, no concern in her voice. Weary eyes flicked once over her china coffee cup and back down to concentrate on the news.

He wouldn’t answer. He couldn’t, unless he spat.

The mass moved to his cheek and he was surprised by the hard clack on teeth, but more by its smoothness. He remembered the day when he’d stopped talking back, how the words burned when unspoken, how they clawed and prickled when strangled down. Now, years later, everything he had always wanted to say, but gagged back, had somehow been layered smooth and round and bland. There was no taste to them now, not anymore.

She wrestled up the newspaper, folded the page hard, and raised a wall of print between them. He verified the date on the masthead, thirty years since the wedding; a day traditionally gifted with pearls.

He swallowed his feelings again as a present to his wife.